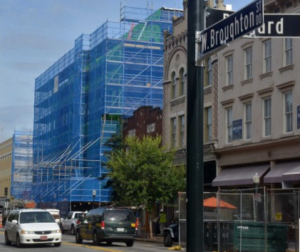 The new H&M under construction on Broughton Street in Savannah

The removal of the twinkle lights that had graced Broughton Street since last year, thanks in part to Atlanta developer Ben Carter — coupled with rumors that he has placed his Savannah homes on the market — has had people wondering whether Carter’s $75 million plan to revitalize the historic street has taken a hit.

But Quito Anderson, CEO of Ben Carter Enterprises, said the project, which was introduced in February 2014, is making progress, albeit a little slower than initially expected.

“It’s taken us a little while to accumulate (property), and obviously there’s a lot of work that goes into not just the insides but the outsides. We’re trying to make everything architecturally and historically accurate and comply with the Historic Review Board and code compliances,” Anderson told the Savannah Morning News.

“Most of the buildings didn’t have fire safety measures you find in normal buildings, so doing all that has just taken us time to work through that process,” he said.

Carter’s Broughton Street portfolio contains 37 properties with a total of about 700,000 square feet. About a third of that is ground-floor retail space; office space and renovated upper floor apartments make up the remainder.

“The important part to convey is that Broughton Street isn’t just one thing. It’s multi-dynamic, and so you’ve got the retail aspect on the first floor, which everyone can see, but you’ve got residential up above in these vacant spaces that have been vacant for 50 years, so you’ve got people down here walking all the time,” Anderson said.

“And office space… A huge piece of our project is office space as well as residential. I think you’re going to see a lot more activity on the street here.”

As for those twinkle lights — Anderson said they’ll be back up the week before Thanksgiving.

“It’s going to be an annual thing… (Carter) always wanted it to be something special. He didn’t want it to be a mundane everyday thing,” Anderson said.

He didn’t elaborate on why the lights had stayed up until July.

Despite the absence of new openings, Anderson was quick to dispute any rumors that Carter might not be as involved in the project as he was during its first days.

“Ben’s a real estate guy through and through, so his mission in life is to buy, improve and sell real estate… He has decided to spend a little more time closer to his family because he has a brand-new granddaughter…,” Anderson said.

“He’ll be spending a little less time here, so he doesn’t need as many bedrooms as he had, but he still has a presence here on Broughton Street…”

Karen Guinn, Carter’s spokeswoman, confirmed that Carter has put one of his three Broughton Street residences on the market along with a home on Wilmington Island but said he will continue to maintain another home there.

The recent closing of Marc by Marc Jacobs had also sparked rumors of Broughton’s rebirth taking a fall, but that closing was because of Marc Jacobs International discontinuing the brand, which the company initially announced in March.

Guinn said Carter isn’t pursuing the space at 322 W. Broughton, which housed Marc by Marc Jacobs, because its owner isn’t offering it for sale.

The Savannah Tap House, which was slated to open at the end of August at 125 East Broughton St., has now pushed back its opening because of issues concerning the design of the façade and marquee.

Anderson said the restaurant is working with the Savannah Historic Review Board to solve the issues, finish construction and be open by mid-December.

But more doors will be opening soon, according to Anderson, who said six new retailers will be announced in the next few weeks.

“It’ll be an eclectic mix of national, regional and local folks, food, soft goods and accessories… That will take our square footage of retail to about 40 percent,” he said.

While Anderson wouldn’t disclose any names, the Historic Review Board, on Sept. 9, passed three requests for Certificates of Appropriateness for signs, awnings and storefront alterations at 115, 109 and 311 West Broughton St. The signs and alterations were for retailers Michael Kors, Victoria’s Secret and Kendra Scott Jewelry, according to the agenda.

One major brand that already has its name on the street is Club Monaco. The mid-priced, high-end clothing retailer is owned by Polo Ralph Lauren and has more than 140 locations worldwide. It is set to open in November.

Swedish retailer H&M will move into a new four-story building that’s under construction at 240 West Broughton. With 35,000 square feet of retail space it will be the biggest retailer on the street when it opens next June and will be home to the only escalator on the street currently.

Carter created some buzz last September, not all of which was positive, when he unveiled his plans for Broughton’s proposed streetscape. They included a grand arched entryway, corner planters, yellow-brick and “Abbey Road” painted crosswalks among other specs.

At the time, Carter and his team were preparing to ask the City Council and the Chatham County Commission to approve a special eight-block Tax Allocation District (TAD) along Broughton, from Martin Luther King Jr. Boulevard to Lincoln Street, to fund the streetscape.

Carter also proposed a Community Improvement District (CID) that would require the consent of a majority of property owners on the street to voluntarily raise taxes to maintain the streetscape.

But nearly a year after those plans were announced, there hasn’t been much improvement to Broughton’s sidewalks or mention of the proposed tax or improvement districts.

According to Bridget Lidy, director of Savannah’s Tourism Management and Ambassadorship Department, Carter’s team approached the city with their plans for the tax district, but the city wasn’t comfortable pursuing that option.

“It’s not just a magic wand that fixes everything,” Lidy said. “It’s something much bigger.”

City staffers, however, are working on a streetscape plan for Broughton Street that will eventually spill over to Bay and River Streets in the second phase. Lidy said staff has been working on developing those plans since 2009.

Most recently, the city accepted statements of qualification from design-build teams through Sept. 1 and Lidy said they will be reviewed over the next month.

Lidy didn’t provide details to what the final picture might look like or discuss whether any of Carter’s ideas will be used.

According to the statement of qualifications, the portion of the project that focuses on Broughton Street will include improvements to brick sidewalks, street lights, curb inlets and installation of decorative and shade trees among other upgrades.

“We reviewed Carter’s proposal and figured out what will and will not work,” she said.

“We want to make sure everything is compatible with the Historic District… But we’re moving forward with improvements and it’s currently underway.”

“We’ve invested millions in just the facades of these buildings, but then to walk down the street and it kind of be a hodgepodge of different types brickwork and concrete, planters at the end of the day isn’t the image anyone wants for Broughton Street…” Anderson said.

“I don’t think you’ll find anyone who is a naysayer on the streetscape improvement. I think you’ll see a strong movement as the city picks up speed on it.”

Progress with a cost

But the changes are coming at a high price for local merchants.

Joseph Dabit, who owns buildings at 26 and 28 W. Broughton St., said he has nothing against progress on the street but wasn’t prepared or pleased for what he saw upon receiving his 2015 Chatham County property tax bill a few weeks ago.

“They told me they took a broad brush and raised everybody,” Dabit said of speaking with the Chatham County Board of Assessors.

“That’s not how you do it. There are a lot of small-business owners on the street, and we’ve been here since 1990. For the two years’ taxes, it’s what I paid for the damn building. I understand progress and I understand it goes up, but to go from $689,800 to $1.8 million in one broad stroke is ridiculous.”

Dabit said he feels like the increase is directly related to Carter’s project, and construction on the street is causing other problems.

He said work crews, scaffolding and trash bins have occupied a number of parking spaces on the street, making it difficult for his customers to find nearby parking when they come to shop.

“I hate to say it that way because I have nothing against progress… You’re taking away about 30 percent of the parking and it’s for improvement we understand that, but at the same token we’re not there yet.”

Dabit has filed an appeal with the Chatham County Board of Assessors who told him the assessment and tax bill are final, so now he’s heading to the Board of Equalization to try to negotiate a reduction, which he still expects to be a high price to pay.

Dabit said he took his concerns to the president of the Savannah Downtown Business Association, Ruel Joyner, who owns 24E Design Company on Broughton Street and said Joyner — who has voiced his support for Carter’s plan in the past — told him he was dealing with a large increase as well.

“Even if we meet somewhere in the middle it’s still going to be expensive… I want to see the improvement but I feel like I’m getting pushed out,” said Dabit, who turned down Carter’s offers to buy him out in 2014. He hasn’t had any more offers from Carter, but said selling to anyone isn’t an option for him at this time.

“I just don’t know what to do… If they’re going to raise the taxes we got to see some big improvements where we’re getting the income, too.”

Multiple efforts to reach Joyner for comment were unsuccessful.

Although Dabit is sticking around, some other local stores aren’t. Dean Caldarelli, CEO of Villa Savannah, confirmed in July that he had sold 109 West Broughton St. to Carter, but his decision wasn’t related to high taxes.

“We sold the building, and our lease has the option for the owner to buy us out, so we enacted that,” he said in July, a few weeks before closing his doors.

Caldarelli said he hopes to eventually come back to Savannah and reopen another showroom, but in the meantime expressed his excitement for Broughton’s upgrade.

“Broughton Street is home, and I love everything that’s happening with all the buildings being renovated,” he said.

“When we came here 10 years ago — it was fun to be part of the renaissance and change that was happening — and now I think it’s happening again at a much quicker pace.”

Following Villa Savannah, Goodwill will shut its doors in January to make way for Tommy Bahama, which will open in the spring, which according to Anderson, will be a turning point.

“We’re just excited about what’s going to happen in the next few months. March of next year will be a pivotal point,” Anderson said.

“Everything will be much more up to speed, much more complete. You’ll see a huge retail presence, our apartments will be done by then, office will be well leased, I think it will be a very pivotal point. I’m looking forward to spring.”