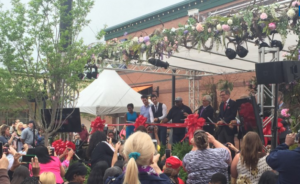 Tanger Outlets Savannah broke ground in fall 2013, and was completed in less than two years.

Tanger Outlets Savannah in Pooler, near the junction of I-16 and I-95, officially opened Friday, 95 percent leased with more than 85 stores.

The mall is a project of Ben Carter Enterprises and Tanger Factory Outlet Centers, and it becomes Tanger’s 44th mall in 24 states and Canada.

The number of outlet malls is increasing in Georgia and elsewhere as store chains try to reach more value-conscious customers. Standard & Poor’s Rating Service reported that nationally only two outlet malls opened a year from 2009 through 2011, but the number grew to eight in 2012 and 11 in 2013.

Outlet Shoppes at Atlanta, a 370,000-square-foot Cherokee County complex that opened two years ago at the intersection of I-575 and Ridgewalk Parkway in Woodstock, announced last week that it has launched an expansion.

Plans are also already under way to expand the 377,000-square-foot Tanger outdoor mall in Pooler. Carter told The Atlanta Journal-Constitution in March that he envisions a second phase that would possibly include a hotel, restaurants and a community center on 40 acres surrounding the outlet mall.

Tanger Outlets Savannah in Pooler is expected to employ about 1,500 workers.